A lot of tunes I like on today's show. Only one crazy song: Ted Gossett's "Fox Chase"--the baying of the dogs and the fox come through loud and clear in his fiddle part. And of course, I screw up a band name or two--e.g., calling the Steep Canyon Rangers by the wrong name. . . .

But the music's a lot of fun. I played two tracks from the original copy (1972) I have of Larry Sparks' 2nd LP--been released and re-released with different names as his catalog has been issued at different times. To me, the picture of the young Larry Sparks, with young Mike Lilly posturing with his banjo, and Wendy Miller holding his mandolin like the goofball he was in concert, and old Art Wydner with his bass--oh and with the three sidemen in matching white polyester pants and belts--with bright red shirts--brings back memories of seeing them in October 1972. Still good stuff--even without my sentimental memories. . . .

In the 2nd half hour, I did play a set of all "old-time" music--the set that begins with Fox Chase. I tried to keep it a varied set--artists from KY, PA, NC, and WVa--and recordings from 1930-1990. But other than that, I just tried to keep a fun mix of music.

Use the "Make a request" link to the right to request a song or to send me a note about a concert or dance I should mention on the air. Thanks for your support!

Use the "Make a request" link to the right to let me know of any
you'd like me to mention on the air. So far, I've just been making passing reference to the Concerts sections of the CTBMA Old Home Place--another of the links to the right of this blog. I'll typically make such announcements towards the beginning of the last half hour (a song or two past 1:30).

3/29 show is "in the can." It will be a good one--lots of old-time, lots of bluegrass, and lots of "Brother Duets." Tracks from 5 LPs I digitized this week, too (Jimmy Martin, Larry Sparks, Joe Val, Frank Wakefield & Red Allen, and the Monroe Brothers).
Posted by Mandorichard at 10:58 AM No comments:

Today's show was a lot of fun for me to put together. It starts out with Big Medicine doing a song that you know you'll hear again on Mother's Day, goes back to my favorite cassette tape of "driving music"--used to have it blasting as I'd cruise I-70 between Columbia, MO and St. Louis way back last millenium. . . .

I love all the music I picked out for today's show, but there were a couple highlights for me: Dunbar--a great "C" tune played so well by Big Medicine, two "spelling songs" (after I picked out the Blue Sky Boys S-A-V-E-D -- how could I resist playing the C-H-I-C-K-E-N song?), Larry Sparks' "John Deere Tractor," a lot of "old friends"--songs that, as Doyle Lawson sings, prove that nothing's as "sweet as yesterday's songs." But the tracks by Banjo Dan, Big Medicine, Perfect Strangers, Adam Hurt, Rayna Gellert, Doyle Lawson, and Dailey & Vincent show that there are plenty of folks out there right now playing great versions of the old music we like so well.

Two hidden treasures I'd forgotten about until this week (both from CDs): Red Allen's son Harley singing "Carolina in the Pines." I used to think that Doyle Lawson's version from the late 70s was my favorite, but this one's mighty fine. . . . What do you think? The other one: Banjo Dan and the Mid-Nite Plowboys "C'est la vie." I just cracked up over that one. A very good bluegrass tune--but singing half of it in French? Guess if you're based in Vermont, you have to be ready to cross over the border into Quebec and connect with the crowd up in Saint-Bernard-de-Lacolle or Notre-Dame-du-Mont-Carmel. . . . :-)

I've fallen behind on digitizing LPs, but will try to have some "new old stuff" ready to go next week. Thanks so much for all your support over the past few months. Notice that I've added a "Make a request" link over on the side of this blog. Drop me a note. Make a request!

Without any further ado, here's the playlist for today.

This week's show goes out to my mom--today is her 84th birthday. I wonder if she'll take time out from tennis, cactus league baseball, and all the other things she does to listen in on wnhu.net! Happy Birthday Emily!

Anyway, this week's show was a lot of fun to put together--I was having such a good time digging things out to play that I didn't leave time for the excerpt of Don Stover's "Black Diamond" that usually ends the show. We still had a few train songs to get out of my system--including 2 versions of the Wreck of the Old 97--including Vernon Dalhart's version recorded back in about 1924 on an old Edison system. One of these days, I'll get around to digitizing Country Gazette's version--I think I have a version on LP where they add sound effects. . . . But for today, Lost & Found's version is also an excellent one.

Other highlights: Hank Bradley's "Bricks and Mortar"--for Tony and Marge; plenty of "brothers" duets; Nickel Creek's "You don't have to move that mountain"--for Zach and REL; some good ol' fiddle tunes from Snake Chapman, Rayna Gellart, the New Pilot Mountaineers, and the Camp Creek Boys; plenty of good bluegrass old and new; Ola Belle Reed's original version of "High on a Mountain"; and a couple of tracks from Chris Brashear and Peter McLaughlin's 2008 CD. Thanks, Chris, for sending me a copy!

Actually, Chris's CD prompted me to add a new block on the right hand side of this blog thanking those of you from the music business who support the Black Diamond Show. Thanks, guys.

I'd like to thank everyone who commented on the Black Diamond Show at the Big Medicine concert put on by the Brandywine Friends of Old-Time Music. Was fun to learn that there are people in Maryland, PA, and DE who tune in to a CT-based radio show online. And thanks to the folks I heard from during today's show--heard from folks in PA, MI, and AZ. Thanks for your support!

Herewith the playlist for today's show:

As I started putting the show together, song after song just sort of jumped out and made a train theme! It all started with Blue Moon Rising's "Freight Train," which led, naturally to the Delmore Brothers' "Freight Train Boogie"--and it just kept going and going. . . . Jim Nunnally's "Big Train from Memphis" and Doc Watson's solo version of "Train that carried my girl from town" were special treats for me to play. And Seldom Scene's "Old Train" made me feel like it was 35 years ago--what's with that grey hair?? That wasn't there when I unwrapped that LP!

One of the problems with listening to LPs over and over is that they tend to wear out. . . . So I was pleased that "Cowboy's Dream" from The Fly By Night String Band's 1979 LP digitized so nicely--some other tracks from my copy of that LP have not done so well.

There are certain bluegrass and old-time country songs that, even though you know what's coming, cause a little tug on the heartstrings (e.g., "Bringing Mary Home," "Two Little Boys," etc.). Well, Charlie & Ira Louvin's "I Don't Believe You've Met My Baby" is one of those songs for me. I first heard it performed by Mary McCaslin and Jim Ringer sometime in the '70s, I think. The first time you hear it, you think it might turn into another murder ballad or broken-hearted-leaving-town-never-to-return lament, so the resolution is--or was to me on first hearing--a very pleasant surprise. Anyway, this week we went back to the source and played a version the Louvins recorded live in the mid-50s.

And then there's a little mini-set that I should explain more than I did on the air--the connection between the three songs was Jimmy Martin: I played Paul Williams & The Victory Trio's "I've been set free" from their latest Rebel CD, then Jimmy Martin's "Sunny Side of the Mountain" from the 1973 Bean Blossom, IN, festival, and then Longview's "Across the Seas Blues." Back in the day, before switching to Gospel 100% of the time, Paul Williams used to play in Jimmy Martin's "classic" version of the Sunny Mountain Boys. And Longview do a great job of covering Martin's "Across the Seas Blues"--I admit to having a lot of affection for that honkey-tonk bluegrass--Buzz Busby, Red Allen, Jimmy Martin, Osborne Brothers--a reminder that even within bluegrass, there is a lot of variety.

And do you know how much self-control it takes for me NOT to play at least one Lefty Frizzell number every week??

Enjoyed hearing from folks in PA, DE, MD, CT, and MI today. Thanks for your support! And here's today's complete playlist: 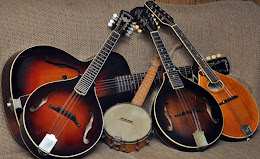